Residential stormwater management and proper drainage around the home can save a lot of time and money in the future. Drainage systems come in a few variations and can be tackled a few different ways. We've seen things like linear strip drains, catch basins, downspouts and pop up emitters around peoples lawns and homes, but what do they really do and when should one choose which? With so much information out there, and given the similarity between the names, one thing people often have questions about is when they should use a trench drain system or a french drain.

If you have been experiencing some water issues, maybe groundwater or surface water evacuation, you are probably already looking into drainage systems.

But which one would be best suited to your needs? Trench drain systems? Or French drain? Are they similar or completely different?

Many factors go into making a correct decision, as you will see. Let's find out which is which to help you determine which drainage system is best suited to your needs. 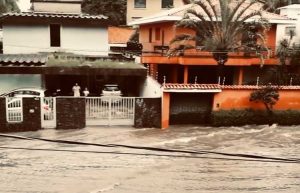 Can a trench drain or french drain stop this flooding? Lets find out.

What are trench drain systems?

Trench drains are linear drains (also known as channel drains, slot drains and line drains etc.) used to easily collect and convey water runoff, stormwater and other surface liquids found around homes and businesses. These modular drains can also be used in industrial applications that require the grate to be forklift rated. In commercial applications, they can also be used to collect snow melt, chemicals, caustics, food and beverage spills.

These surface drainage systems are made of a dominant channel- or through-shaped body with a solid cover, cast iron, polymer or steel grating. It is usually made out of pre formed concrete or polymer channels. Channel composition comes in a variety of composite materials such as Fiber reinforced concrete, polymer concrete, stainless steel and others depending on project requirements. Trench drains can also have decorative grates and come in different slot styles such as perforated and ADA depending on expected pedestrian traffic. 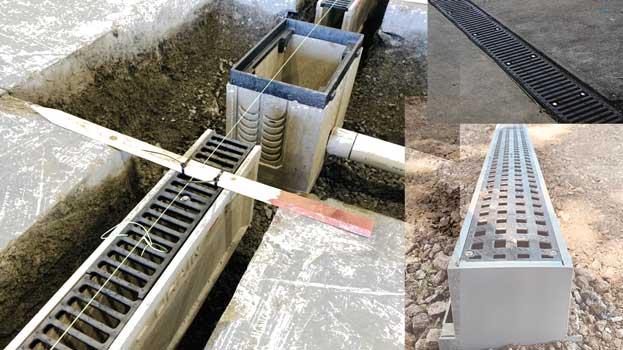 Based on the manner in which they are formed or installed, there are 4 types of trench drains which are commonly used:

Trench drain systems original standard where a trench made out of concrete is formed in the ground manually with the aid of wood forms and a reinforcing bar. There is also the option of using stainless steel.

A successor of the previous installation method, where wood forms are replaced by cardboard or lightweight expanded polyester (LEP), which are also removed after the concrete has dried. A faster and cheaper option.

These are made in factories specializing in making concrete shapes of various length and width and then moved to a site. They can also be made out of polymer concrete, which is sturdier, more reliable, and easily installed. Again, more advantageous in terms of time savings and even though more expensive, in the long run much more cost-efficient.

Currently, the most popular trend in trench drain systems is linear or in-line drains. Made out of steel, plastic, polymer concrete, and fiberglass, these are channel grate components assembled in the trench, around which concrete is poured to ensure compressive strength and rigidity.

So where are trench drains used mostly?

They were first commissioned by British airports which needed more resilient trench drain systems due to heavy traffic.

Other industries have followed their lead and they´ve appeared in various construction projects such as motorways, roads, docks, ports, car parks, urban development projects, as well as in modern homes…

They fulfill their purpose most efficiently in houses with negatively sloped yards, moving water naturally towards the foundations, inflicting damage.

How are trench drains installed?

Trench drains can be installed in a few easy steps.

Depending on the length of the run, excavate a trench to fit the channel.

4" on either side and 4" below (class A and pedestrian)

8" on either side and 8" below (class A, B, C and D, Heavy duty trench drains and forklift rated trench drains)

Most trench drains have attachments for rebar. Rebar prevents the channel from floating during the concrete pour. Fiber reinforced concrete channels and Pre fab trench drain systems are articulated so the concrete forms around the curvature of the channel. Installation chairs are also a good way to prevent floating for concrete trench channels but are not always required.

A lot of people ask if one can install a trench drain directly into asphalt. This isn't advisable. All trench drains that require a traffic rating should be installed and encased with a concrete pour. One can fill the top of concrete with asphalt to bring the surface to grade.

Polymer and HDPE channels usually come pre sloped, are numbered and have slip joints for easy installation. They connect like lego pieces.

Concrete channels are usually butt together and an adhesive is applied.

How to slope a trench drain?

Trench Drains usually come pre sloped, but it's easy to slope it oneself. To slope a trench drain, installation brackets are the best bet. With an installation chair, the level of each channel can be dropped by one notch or tab to create the desired slope. Each tab is .25% of slope. Lasers and guides can be used to maintain uniformity.

How to build a trench drain in a driveway?

Driveway drains are the most common of residential trench drain applications. Garage trench drains keep water from leaking into the basement and causing damage to the foundation. Material choice comes in to play when considering an outdoor trench drain. There are certain materials that do better in salt environments, high and low temperatures and snow melt. Epoxy coating, galvanizing or a baked on oil finish are some ways that mitigate rust.

What about French drains?

A French drain system or weeping tiles, rubble drain, rock drain, French ditch, etc. is composed of a trench which is filled with rock or gravel, containing a perforated pipe that redirects groundwater from an area to a storm sewer, irrigation system, swale, etc., thus preventing damage (instability or mold).

For this subsurface structure to be effective, it should imitate the natural flow of water, from the highest to the lowest point in the ground.

They might have been invented in France, but they have been popularized by Henry Flagg French in the 19th century. Ever since it has been the most used and known drainage system people have used.

Their primary use is to prevent groundwater penetrating and thus damaging the foundations of buildings. They can be used as an alternative to open ditches and storm sewers, as well as septic drain fields. Another use is to relieve the groundwater pressure behind retaining walls. 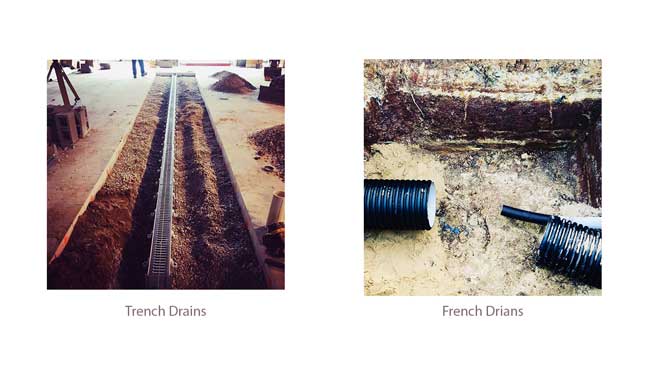 There are several variations of French drains:

Comprised of a perforated pipe enclosed with gravel. It differs from the traditional French drain by not extending to the surface and by being covered by soil. It then becomes covered by grass and other vegetation, making it an attractive option for landscape artists.

A combination of groundwater drainage and surface water or run-off water interception with the option of being connected to underground pipes for rapid diverting.

Consists of a perforated pipe below ground 7.9 inches (200 mm) of length extending perpendicularly upwards along a thin vertical section – the fin.

Where are French drains used mostly?

Apart from landscaping, they are often installed around home foundations either on the external side of the foundation wall or underneath a basement floor.

French drains are evolving very quickly and most significantly from its origins – a hand-dug ditch. Now they use ceramic tiles, PVC pipes, with rapid drain innovations and improvements that address the weaknesses of the previous ones.

How to build a french drain?

French drains are installed similarly to trench drains. In short, to install a french drain, a large tube like corrugated pipe is filled with sand and gravel. This tube is dug and extended underneath the lawn bed. As water begins to soak into the lawn and permeates through the tube, the sand and gravel assist in equally dispersing it to the surrounding areas.

Even though trench drains often get confused with French drains, as you can see, they´re intended for opposite purposes.

So it's pretty simple. First, establish which kind of water issue are you experiencing or you anticipate having.

If water is accumulating somewhere on the surface around your home, possible chemical spills in your facility, or any kind of surface water management issue – trench drains are your go-to drainage system.

On the other hand, if you would have to deal with water penetrating the surface, finding its way to the foundations of your home or another type of structure thus inflicting water damage such as instability or mold, then you should be looking at subsurface drainage system, in this case, French drains.

You might be particularly unlucky and have to deal with both surface and subsurface water management issues. This is not that uncommon, and here the combination of trench and French drains is the most optimal solution.