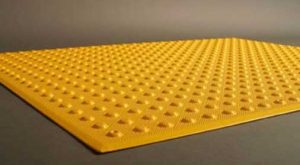 What Are ADA Compliant Detectable Warning Plates and How Do They Help Us?

For visually impaired people moving around is pretty difficult and can often be very dangerous. That's why inventors are coming up with new ways to help them. One of them is detectable warning plates.

You have probably seen them and even walked over them but haven't noticed them or had no idea what are they.

In this article you will learn what detectable warning plates are and how they are helping people with visual impairment, making their every day more enjoyable. 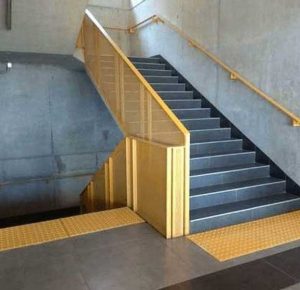 Detectable Warning Plate in a School

What is the ADA?

The Americans with Disabilities Act is a civil rights legislation passed in 1990 that prohibits discrimination and guarantees people with disabilities, both physical and mental, the same opportunities of participation in mainstream American life as everyone else.

In short, ADA is a ˝equal rights˝ law for people with disabilities. It does not list each disability specifically, but it does touch upon vision impairment quite extensively.

It is divided into five titles dealing with different areas in which discrimination might occur, from employment, public transportation and services to telecommunication, etc.

As a result, it requires that governments, both state and local, implement certain curb cut specifications. 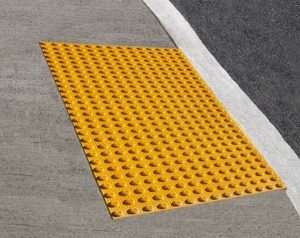 Decreased ability to see to a degree which causes problems to the person's everyday life and is not fixable with the use of glasses or medication is defined as visual impairment or disability. It can be caused by a congenital or degenerative condition, trauma, disease, etc.

It is estimated that in 2019 at least 2.2 billion people globally suffer from some form of vision impairment or blindness. 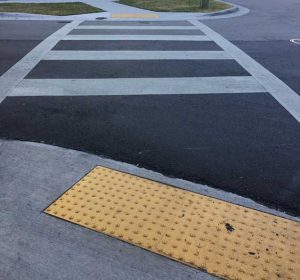 What are Detectable Warning Plates?

Detectable warning plates or surfaces, tactile paving, Tenji blocks, truncated domes, tactile ground surface indicators, etc. are defined under the Americans with Disabilities Act (ADA) Guidelines as ˝distinct surfaces with a pattern of raised domes that can easily be detected by the use of a cane or feet and serve to alert people of their approach to hazardous locations˝.

They are aimed specifically at people with sight impairments, serving as a warning of places where they might be endangered, like approaching streets and busy intersection, stairs, a rail platform drop-off, as well as hazardous surface or grade change, etc. They´re widely used in subways and sidewalks.

Detectable warning plates assist visually impaired effectively navigate their surroundings but they can also alert people without any visual disabilities, who are distracted and do not notice what lies ahead.

They were first introduced in 1967 in Japan at pedestrian crossings and other dangerous road situations while the UK, USA, and Australia instituted them in the early 1990s. 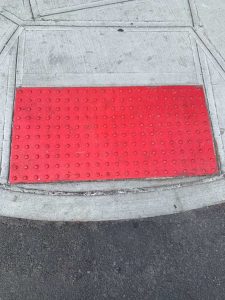 Detectable warnings are included in the standards issued under the ADA. These address specifications of truncated domes (spacing, height, diameter, etc.) to ensure that these warning surfaces are distinctive yet uniform at the same time.

Per guidelines, detectable warnings are especially important along public streets and sidewalks, due to vehicle traffic. The specific places they are required are: 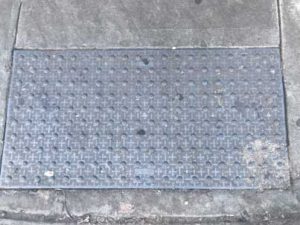 There are several requirements that have to be met to ensure that detectable warning surfaces are truly purposeful.

They should have a center-to-center spacing between 1.6 inches (41mm) and 2.4 inches (61mm) and a base-to-base spacing of 0.65 inches (17mm) minimum between the most adjacent domes on a square grid.

Color contrast with the adjacent walking surfaces is mandatory, either dark-on-light or light-on-dark.

On platform boarding edges, detectable warning surfaces should be 24 inches (610mm) wide and extend the full length of public use areas of the platform.

Square patterns consisting of rows of flat-topped blisters. Used for pedestrian crossings, with the purpose to alert visually impaired people of a change of height of > 0.9 inches (23mm).

Also known as the ˝platform edge (off-street) warning surface˝, its purpose is to alert of the edge of all off-street railway platforms, including heavy rail platforms, underground platforms, but should not be used on street platforms.

Known as the platform edge on-street warning surface as well, it´s designed to warn vision-impaired people they are approaching the edge of an on-street rapid transit platform.

Designed to warn of the presence of steps, level crossings, approaches to on-street light rapid transport platform, it conveys a message of proceeding with caution. It´s installed also where footways join a shared route as well as at the top or bottom of the stairs, foot of a ramp, etc.

Used in conjunction with a segregated shared cycle track and footpath, it´s purpose is to point to the right side to enter.

When traditional guiding cues along a route, such as a property line or curb edge, are not available, the purpose of this tactile is to guide visually-impaired people. It can also guide around obstacles (e.g. street furniture). 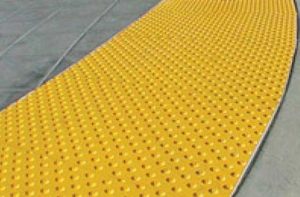 The Necessity to Include Visually-Impaired Citizens in the Everyday

The ADA gets updated from time to time with new specifications and regulations, but what never changes is that any form of discrimination against people with disabilities, those visually-impaired included, is gravely sanctioned.

Freedom of unimpeded movement is one of the human rights which all of us, with or without disabilities, are entitled too. We only need to help out those who are not able to move as easily. That's why detectable warning surfaces should be an integral part of every walking surface available.